surroundings of the CHALET Plesnivec 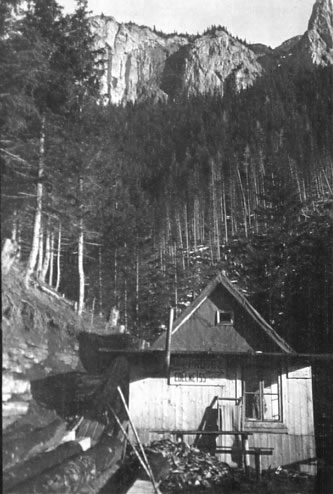 Chalet in Dolina siedmich rameňov was first mentioned in the end of 18th century, when gold-digger Dreschler, who lived in nearby village Rakusy, built a cabin in the walley. Later in 1892 new cabin was built in this spot by manufactures of wheels. In the valley they harvested maple wood used for wheel and tools production. They build the cabin to have a place to hide in case of bad weather. It was also used by shepherds, who shepherded sheep and heifers in the area of Predné Meďodoly, Kopské sedlo and Zadné Meďodoly. In 1932 resident of Spišská Belá Tibor Gresch, member of Carpathian league and great High Tatras lover rented a land from the town of Spišská Belá and transformed the old cabin into tourist quarters called Plesnivec /Edelweiss/. In 1936 he also added a first floor. There were two shared bedrooms and four rooms for better-off guests. Altogether there were 50 places to sleep. Grand opening of new chalet took place on 26th June 1938. Chalet had its own white and blue flag with sign of edelweiss in it.

At the end of war Tibor Gresch had to leave Slovakia. Since then chalet started to decline. In 1948 it has become state property. It had served the tourists until 1953. Later on it was managed by administration of TANAP national park an was closed for public. Eva Ružičková-Kasická from Prague looked after the chalet. The chalet had become a weather station. During summer months chalet was visited by botanists and biologists from Masaryk University in Brno and Pedagogical college in Plzeň. They chose this valley because of its rich representation of plant species in Tatras Mountain. Mrs Eva Kasická and her husband stayed in the chalet until her retirement in 1978. Since then the chalet was empty and abandoned. In 1993 chalet has once again become property of town Spišská Belá. Town rented out the chalet to its current owner Mr. Ján Matava from Spišská Belá and approved some finances for reconstruction of the chalet. At first Ján Matava together with his friends and relatives mended the road, restored bridges over river Čierna voda, replaced the roof and mowed beams and insulated the chalet. It was followed by works inside the chalet. In spring 1995 sewer was dug, windows were replaced, floor was put down, shingle were placed. In 1995 central heating was installed. In 1996 they built sewage treatment plant and social facilities were finished.

Final works in the chalet and its surroundings were finished in 1997. The chalet has retaken its symbol edelweiss and its former name – Plesnivec /edelweiss/. The chalet was colauded and sanctified on October 4th 1997 and it has served all once again.

You can park here …